We were working late last night trying to get the second robot (qa1) put together. The first robot, qa0, has been pretty stable for a couple of weeks but getting everything put together and configured for qa1 took a while. So about 11:30 we got it working, and we had two robots. Woo-hoo! Two identical robots, simultaneously balancing a few feet apart, looked pretty cool. I can control either from the client, with a drop-down menu, and I can just 'ssh qa0' or 'ssh qa1' to hack on them.
I was testing a safety shutdown feature so that if the robot got knocked over it would shut down rather than keep trying to balance. Monty has had this for a long time, but the QA balance system is a new implementation. So I ask the guys to pick up qa0 and tip it way over. It doesn't work: it keeps spinning its wheels trying to balance. So while they're holding the robot with spinning tires I ssh into it, bring up the emergency control panel gui and click the shutdown button. And across the room, qa0 goes down with a smash. A straight faceplant. I sshed into the wrong robot.
We flip it over and inspect the damage. Its face hit a metal light box left out from yesterday's photo shoot and was busted into several pieces. The chest structure was mostly intact, but it had long visible crack lines through the paint. 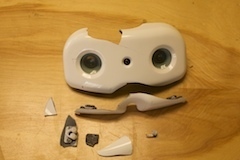 We had a spare face, but no spares of the big and expensive chest pieces. So we called Scott. He woke up the third time we called and came in. He said when the phone kept ringing, he figured that either the robot had broken or his grandmother had died, but his grandmother was already dead, so it must be the robot.
While waiting for Scott, we took care of some last details on qa0 like the lighted power button. Something must have been wired backwards because when we plugged it in the motherboard died and wouldn't power up again. So we went from two working robots to zero in the space of half an hour. 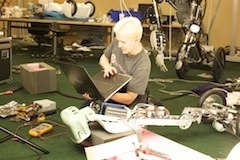 By 4 am Scott had reinforced the chest piece with fiberglass and polyester resin, added body filler and sanded the outside smooth, and the rest of us had replaced the motherboard in qa0. Then first thing this morning, while the airport taxi waited outside, we took the chest piece to the paint shop down the road and begged for a rush job. Amazingly, they said they can get the several coats of paint and clear-coat done by the end of the day. 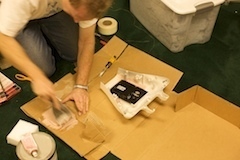