As a Harvard alum and (small & indirect) investor in Facebook, I figured I should read Aaron Greenspan's book AUTHORITAS, subtitled "One Student's Harvard Admissions and the Founding of the Facebook Era". But it's pretty long, so I used Knuth's technique for literary analysis: take a slice through the book and analyzing selected sentences in detail. His calligraphed book 3:16 studies chapter 3, verse 16 of every book in the bible. (He chose those numbers because John 3:16 is a well-known verse and he wanted to make sure he got at least one good one.) Here is chapter 3, paragraph 16 in Brush Script MT Italic: 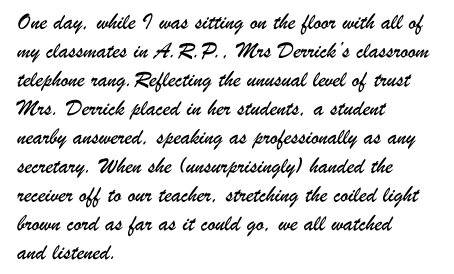 From a quick scan of the rest of the page I didn't find a definition of A.R.P., but did see that this is set in sixth grade. The paragraph uses digression to build suspense. Readers unconsciously assume that when the writer takes this long to get to the point, it's going to be big. Has Kennedy been assassinated? No, wrong time period. This was early 90s. O.J. Simpson not guilty? Cold fusion? The Pope pardons Galileo? What would make such an impact on him? It turns out, another teacher wanted help installing a computer, so he's excited that his reputation as a guy who knows about computers has spread. Since the teacher just announced to the class that he was going to be setting up a computer, his reputation has spread farther. It says on the book jacket that he started a computer repair business when he was 15, so I assume this is the beginnings of it.

Actually, he's not using digression to build suspense as much as to simply digress. We learn that he sat on the floor in sixth grade, that his class's teacher trusted them, that the phone cord was coiled and light brown. I don't remember the color of the phone cord in my sixth grade class, but I'm sure it wasn't formative to my career. It's fine to give some context, but do we really need this much?

To be fair, chapter 2 or 3 in an autobiography -- the "back to the beginning" chapter, is often like this. His is titled "A Hard Lesson". I theorize that most readers skim this chapter, and autobiographers know it so they load it up with digressions that the editor would excise anywhere else in the book.

On to the first paragraph of page 316 (in Lucida Handwriting Italic):

In a way it's similar to the first 3:16, in that it serves to set the stage for a conversation but adds a lot of detail. The conversation led to his joining Facebook. What's alarming is that it's on page 316 of 333, he's just meeting the guy who introduced him to Facebook. It seems the vast majority of the book is about his education & computer repair company.

This happens to be just a few paragraphs below chapter 3, paragraph 16. It leads to a long story about how he tried to copy the software from someone else's computer but it wouldn't fit on a disk and on on. I guess I never understood the fascination of Windows system administration.

This comes at the end of a section separated from the next by a little Harvard shield. It foreshadows the next section when he catches his economics teacher in an algebra mistake which he devotes nearly 2 pages to explaining. He criticizes (Harvard) professor Neugeboren for drawing poorly and making algebra mistakes on the blackboard. He writes to the dean, and they get a substitute teacher for the rest of the year. The rest of the chapter is about him negotiating for higher grades by arguing about ambiguous exam questions. Justice is served, he proclaims at the end.

Being at Harvard makes young men and women feel important. They often become important as a result. Feeling the importance of one's own life gives people the courage to attempt great things, with good consequences on average. But some go past "important" into "entitled". He seems to be fairly self-aware, so I assume he gains some perspective later in the book.